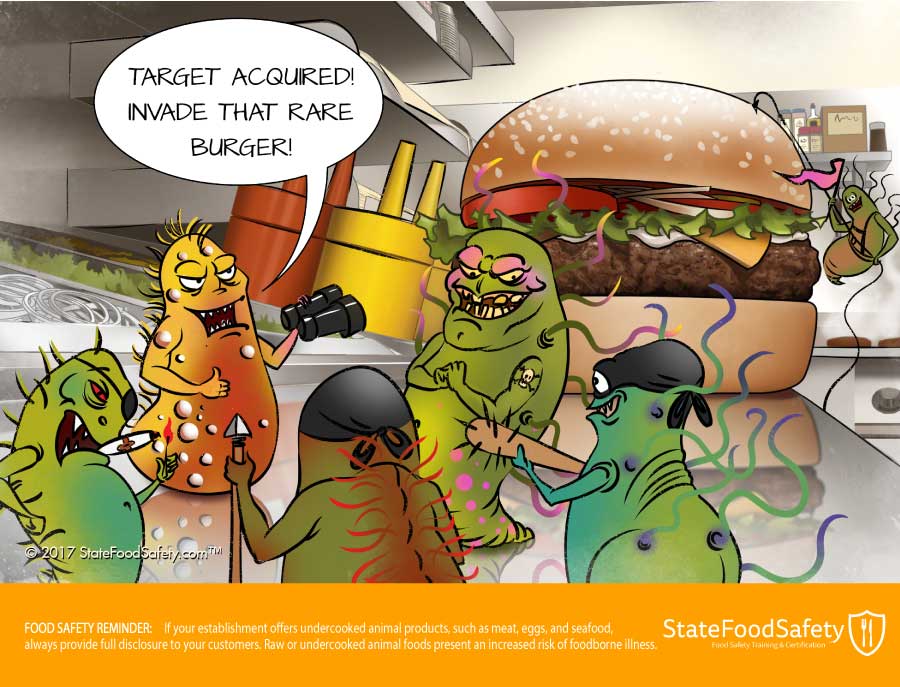 The following list of temperature myths isn’t exhaustive, but it offers insight into some misconceptions food workers might have about temperature control.

Myth 1. I can thaw meat any way I want as long as I cook it to the correct cooking temperature.

False. Even when meat is frozen, the outside thaws more quickly than the inside. This means bacteria can begin growing on the outside of thawing meat even while the interior is still frozen. Some bacteria, like staphylococcus and Bacillus cereus, give off toxins that aren’t destroyed during cooking. If these bacteria are allowed to grow, they can make food unsafe to eat even after it’s fully cooked.

Myth 2. My marinade is acidic, so it’s safe if I leave marinating food out on the counter.

Bacteria grow quickly at room temperature, even in acidic environments. Marinated foods can become unsafe if they’re left out to grow bacteria.

Instead, put marinated foods in the refrigerator. Marinades still work in refrigeration temperatures, and putting food in the fridge will stop bacteria from making the food unsafe.

Not quite. The FDA recommends refrigerating food at 41°F or slightly cooler. At that temperature, bacteria growth doesn’t stop, it only slows down. Food would need to be fully frozen to put a hold on bacteria growth. The refrigerator extends food’s freshness, but it doesn’t keep food safe indefinitely. For that reason, throw out ready-to-eat food that has been in the refrigerator for more than a week.

Myth 4. I can cool hot food however I want as long as it was cooked to the right temperature.

Actually, food that is cooled unsafely is one of the biggest sources of foodborne illness.  As food cools, it passes through the temperature range between 41°F-135°F. Bacteria grow so well in this temperature range that it’s sometimes called the temperature danger zone. To keep hot food safe, it must either be hot-held above 135°F or cooled to 41°F in six hours or less.

Always cool food safely according to FDA recommendations.  For example, a large batch of hot food can become dangerous in the refrigerator. Food near the center of the pot will take much longer to cool than food near the edges, and that’s where the trouble starts. The center of the pot will retain heat and could create an environment where bacteria can multiply to unsafe levels.

A safer way to cool a large batch of food is to separate it into shallow pans before putting it into the refrigerator. Other cooling techniques, like stirring food or using an ice bath, can also help food cool safely.

Myth 5: Restaurants serve rare meat all the time, so it must be safe to eat.

Undercooked meats are more risky to eat than meats that are cooked. Rare steak and sushi are generally safe, but even they cause foodborne illness more often than steak or seafood that is fully cooked.

Some requests for undercooked meat should always be turned down. This includes requests for any undercooked meats that aren’t steak or sushi. Undercooked pork, chicken, or ground beef is too dangerous to eat. Likewise, customers who are susceptible to foodborne illness—like the elderly, pregnant women, or young children—shouldn’t be served undercooked or raw meat.