Iced tea, or “ice tea” as it’s pronounced in Texas, is known for its year-round popularity in the Lone Star State.

The drink inspires endless debates about the best way to prepare it. Should it be brewed in hot or cold water? Using tea bags or instant tea? Sweetened or unsweetened? Served over crushed or cubed ice? With lemon or no?

For the most part, if you serve iced tea in your restaurant, there is no wrong way to make iced tea. The only exception is sun tea, or iced tea that is brewed by leaving it out in the sun.

How iced tea can make someone sick

In general, tea is considered a relatively safe food. Until 2010, the Centers for Disease Control and Prevention had no reports of a tea-caused foodborne illness outbreak on file.

But although outbreaks are pretty rare, iced tea can still make someone sick if it’s handled incorrectly. According to the CDC, Texas has had five foodborne illness outbreaks involving iced tea since 2017. As a result of the outbreaks, 50 people became sick. 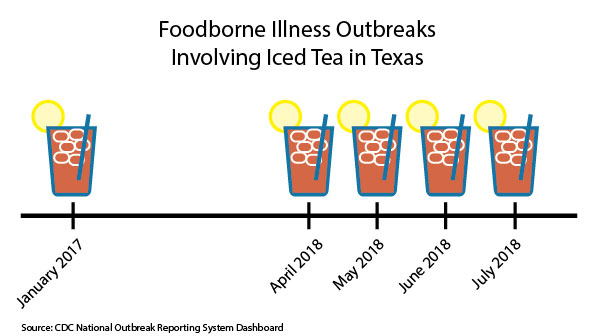 The first outbreak, reported in January 2017, occurred during a wedding dinner at a banquet facility. Iced tea was one of the many items on the menu. This outbreak alone was responsible for 40 foodborne illnesses.

In April 2018, a smaller outbreak involving iced tea was reported at a buffet restaurant. A few months later in July, a sit-down restaurant was involved in another outbreak. In each instance, two people became sick after eating a meal that included iced tea.

So how can iced tea cause foodborne illness, and what can you do as a food handler to help prevent it?

The bacterial dangers of sun tea

“Sun tea” gets its name from its brewing method — sunshine. It’s made by leaving a pot of water with tea bags out in the sun for several hours. But this can be a risky way to make tea.

According to the University of Iowa Extension, although sunshine does get the water hot enough for the tea to brew, the water doesn’t get hot enough to kill foodborne bacteria. There are several different types of bacteria that could grow in sun tea, including Alcaligenes viscolactis, Klebsiella, Enterobacter, and sometimes even E. coli.

Each of these pathogens could make you, or one of your customers, sick. If you work in a commercial kitchen, never use this method to brew iced tea.

Microorganisms can grow in iced tea — and tea dispensers — if you handle it incorrectly or don’t clean and sanitize equipment often enough.

Read on for specific tips on how you can keep the iced tea in your establishment safe.

How to prevent foodborne pathogens in iced tea

Iced tea can make someone sick if it is brewed or served in a dirty container. The FDA Food Code recommends cleaning and sanitizing iced tea dispensers at least every 24 hours. That means if you have tea brewers and dispensers in your establishment that are constantly being used, they must be cleaned and sanitized regularly.

Why every 24 hours? Cleaning the dispensers that regularly will help prevent slime, mold, soil residues, and microorganisms from building up inside them.

To clean a tea brewer or dispenser, follow the steps for cleaning in place.

2. Control the temperature of iced tea

Some kinds of iced tea may be vulnerable to bacterial growth in the temperature danger zone (41–135°F). But no matter what kind you serve, it’s a good idea to control the temperature of all tea just to be safe.

If you used the hot brewing method to make the tea, make sure you cool it to 41°F or below within six hours. Follow the two-stage cooling process, which requires hot food items be cooled to 70°F in two hours or less, then from 70°F to 41° in four hours or less.

If necessary, there are a few different tricks you can use to make sure tea cools quickly enough:

Once the tea has reached 41°F or below, it’s your job to make sure it stays there. Your tea dispenser may have a built-in thermometer, but don’t rely on it completely. Every so often, you should also check the tea’s temperature manually with a food thermometer to make sure it’s staying cool.

Germs can multiply to dangerous levels in four hours. If you have reason to believe tea has been sitting at room temperature that long, throw it away.

3. Don’t leave iced tea too long in the fridge

Of course, iced tea enthusiasts will tell you that freshly brewed tea is best. But it’s not always practical to make a fresh batch every time a machine runs dry. Maybe it’s standard procedure for your establishment to make a big batch of iced tea in the morning, put the batch in the fridge, and use it to refill dispensers throughout the day. Or maybe you put tea in the fridge to help it cool.

According to a memo from the Centers for Disease Control and Prevention (CDC) quoted in Food Safety News, iced tea should only be kept in the fridge for up to eight hours. If you have any iced tea left at the end of your workday, throw it out.

Although outbreaks involving iced tea are relatively rare, it’s a good idea to remind your employees how to handle it safely. New employees, or employees who need to renew their food handler license, should take the Texas food handlers training required by the state.

You can also use physical reminders in your establishment like the Cleaning in Place Poster to help your team remember how to keep iced tea safe.