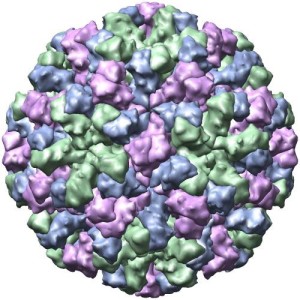 Image from the RCSB PDB.

The human norovirus (from here on called simply “norovirus”) is the most common cause of foodborne illness in the US. Most of us have heard of it as the “stomach flu,” and people with the virus usually get better after a couple of memorable days of intense vomiting and diarrhea. We shed the virus in the millions to billions in our stool and vomit, and it is so effective at causing disease that an estimated 1 in 15 Americans is expected to get sick with the virus each year. The virus is particularly important to the food service industry because infected food workers caused 70% of foodborne norovirus outbreaks in the US between 2009 and 2012. In over half of these cases, it was linked to a ready-to-eat food such as a salad or sandwich that the infected worker had touched with their bare hands.

One important area of norovirus research is finding ways of inactivating the virus on hands, foods, and surfaces so that it cannot cause disease. Think about the common places norovirus turns up, such as schools, hospitals, restaurants, and other areas where lots of people gather, and it is easy to see why having effective disinfection methods are important. Norovirus is also known for being particularly hard to get rid of, and many of the common disinfectants and sanitizers have not been shown to be effective against the virus.

There are several methods we currently use to inactivate norovirus, such as through the use of heat, changes in pH, ultraviolet light, high pressure, and chemicals like alcohols and chlorine bleach. However, the all-important caveat is that we have been unable to propagate norovirus in cell culture, meaning we have not been able to directly examine what these things do to the virus, and whether they render the virus unable to infect someone.

We have instead turned to the next best thing, which is studying other related viruses that we can culture, and use them to make inferences about the human version. Some of the common surrogate viruses include feline calicivirus (FCV) in cats, murine norovirus (MNV) in mice, porcine enteric calicivirus (PEC) in pigs, and Tulane virus (TuV) in rhesus macaques. FCV has been a classic stand-in for norovirus because we have been able to culture it for decades. MNV is a newer choice, discovered in 2003, and is genetically closer to norovirus than FCV. Newer still is TuV, and it and PEC have been gaining a lot of attention in recent years.

Unfortunately, the different surrogates perform differently when exposed to the various inactivation methods, muddying the waters when it comes to comparing them to human noroviruses. For example, FCV is inactivated at a pH of 2, while MNV and TuV are not, and norovirus is similarly resistant to low pH. Compared to the other four surrogates, FCV is the most susceptible to changes in pH, chlorine bleach, and high pressure. This does not mean FCV does not have its place in research, because no one surrogate is the best choice for all tests. For example, MNV is more susceptible to alcohols than the other viruses, including norovirus. On the whole, MNV and TuV are the most resistant to inactivation methods, making them the conservative way to go when testing ways of inactivating norovirus.

Understandably, since we often base our knowledge on what happens to these surrogates, it can be hard to say with certainty that a product or technique was “effective at killing norovirus” because norovirus was not actually tested. Researchers are still trying to find ways of culturing norovirus, and in the meantime, these surrogates are the best option available, and in the right conditions, do their jobs as stand-ins very well.

<< Older
Giving Up Gluten: The Benefits, the Drawbacks, and When It Is Necessary
Newer >>
Checking for Valid Identification Cartoon
