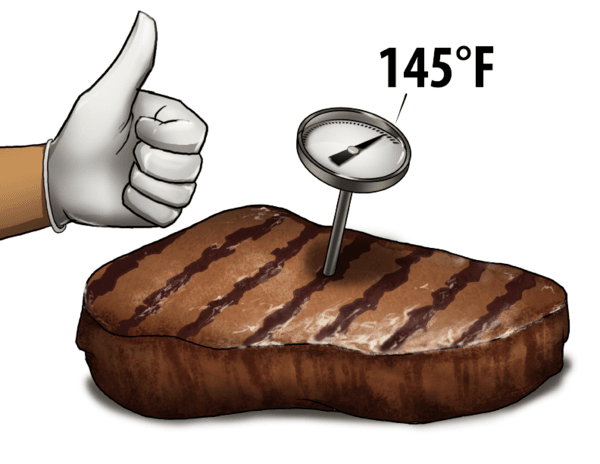 One of the most satisfying sounds is the sizzling of fresh top sirloin as it’s laid across the grill. Maybe it’s lathered in butter, or it’s been marinating in a delectable secret sauce for the past couple days. Peppercorn cracks as the smell of heaven wafts through the evening summer breeze.

Steak is amongst the grill master’s most prized delicacies. Enjoying a tender, juicy, sauteed cut often accompanies important moments, such as a birthday, an anniversary, a business deal, or a reunion. As the meat broils, the good times roll.

Here at StateFoodSafety, we celebrate good times enjoyed with good food that has been prepared safely. To accompany your next barbecue, we’ve prepared five food safety tips for cooking steak. Try not to drool on your keyboard as you read on.

Wash your hands, not the meat

The first step in any meal preparation should be to wash your hands. Using soap and warm water, scrub your hands for at least 20 seconds to remove any bacteria that could contaminate the food you’re preparing. You should also wash your hands throughout the cooking process, especially if you touch raw meat.

You may be tempted to wash the meat you’re cooking to remove bacteria from it. The truth is, as long as the meat has been properly refrigerated or frozen, any harmful bacteria that’s on it will be cooked out. Washing the meat will only spread bacteria to your sink and surfaces around it. Don’t wash your meat before cooking it. You should also keep all food preparation surfaces and utensils clean.

If you want to prepare your steak by marinating it before cooking, make sure to keep it refrigerated. Meat should be kept below 41°F until it is ready to be cooked.

When perishable foods like steak are left in the temperature danger zone (between 41°F and 135°F) for longer than four hours, bacteria can quickly multiply on the food. This bacteria is resistant to heat and can’t be cooked out later.

Be careful not to cross contaminate vegetables with raw meat

If you’re going to saute some vegetables or cut up some potatoes to go with your steak, make sure to not let these food touch the juices from the raw meat. The raw juices can spread bacteria to the vegetables that will be harmful if the vegetables aren’t cooked to the same internal temperature as the meat.

You can avoid cross-contamination of bacteria from meat to vegetables in a variety of ways. Use separate cutting boards and knives to cut meat and vegetables, or wash and sanitize utensils thoroughly between use. Keep food preparation surfaces clean. Don’t place raw meat and vegetables in the same containers unless you will be cooking them to the same internal temperature.

Many people wonder if it’s safe to eat rare meat. A steak with pink in the middle is considered a delicacy by many.

Here’s the standard: steak should be cooked until its internal temperature reaches 145°F. That’s the only way you can be sure it will be safe to eat. Eat Right recommends avoiding eyeballing the meat to determine if it’s done. Instead, check the temperature with a meat thermometer.

Insert the thermometer into the middle of the meat, and check the temperature in multiple places in each cut. If the steak is cooked to 145°F throughout, all the harmful bacteria within has been cooked out.

If you eat undercooked steak, you are accepting the risk that it could make you sick.

After the steak has been cooked, take care not to leave it out for longer than four hours. If you do, bacteria can multiply to dangerous levels and the steak should be thrown out.

Use a properly calibrated meat thermometer

When checking the temperature of the meat, make sure the thermometer has been calibrated properly. The easiest way to do this is the freezing point method, or ice point method.

Fill a glass with ice water, and let it sit for a couple minutes. Then, place the thermometer in the water without letting it touch the sides of the cup. The temperature should settle at 32°F. If it doesn’t, you need to calibrate it until it does. Once you’re sure the thermometer displays the correct temperature, use it to check your steak.

Enjoying steak should be about the aroma, the flavor, and the people you’re with. It shouldn’t be about the worry of getting sick. Follow these food safety guidelines to properly prepare your steak.

Looking for more food safety tips? Check out our resources page and our food handler training.